How to find information if your topic is Capital Punishment

To find articles about Capital Punishment and the Death Penalty, you may choose to use the following Databases.  To log in, go to the  Miami Dade College   Libraries Home Page, www.mdc.edu/libraries  and click MDC Libraries.      Choose Articles/Databases.   Enter your student number and PIN, the last four digits of your student number.   Some good databases to choose are the following:

Issues and Controversies (Facts on File) 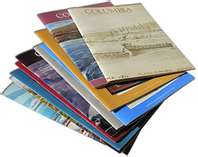 This is an example of some articles that were found in the database: Opposing Viewpoints: