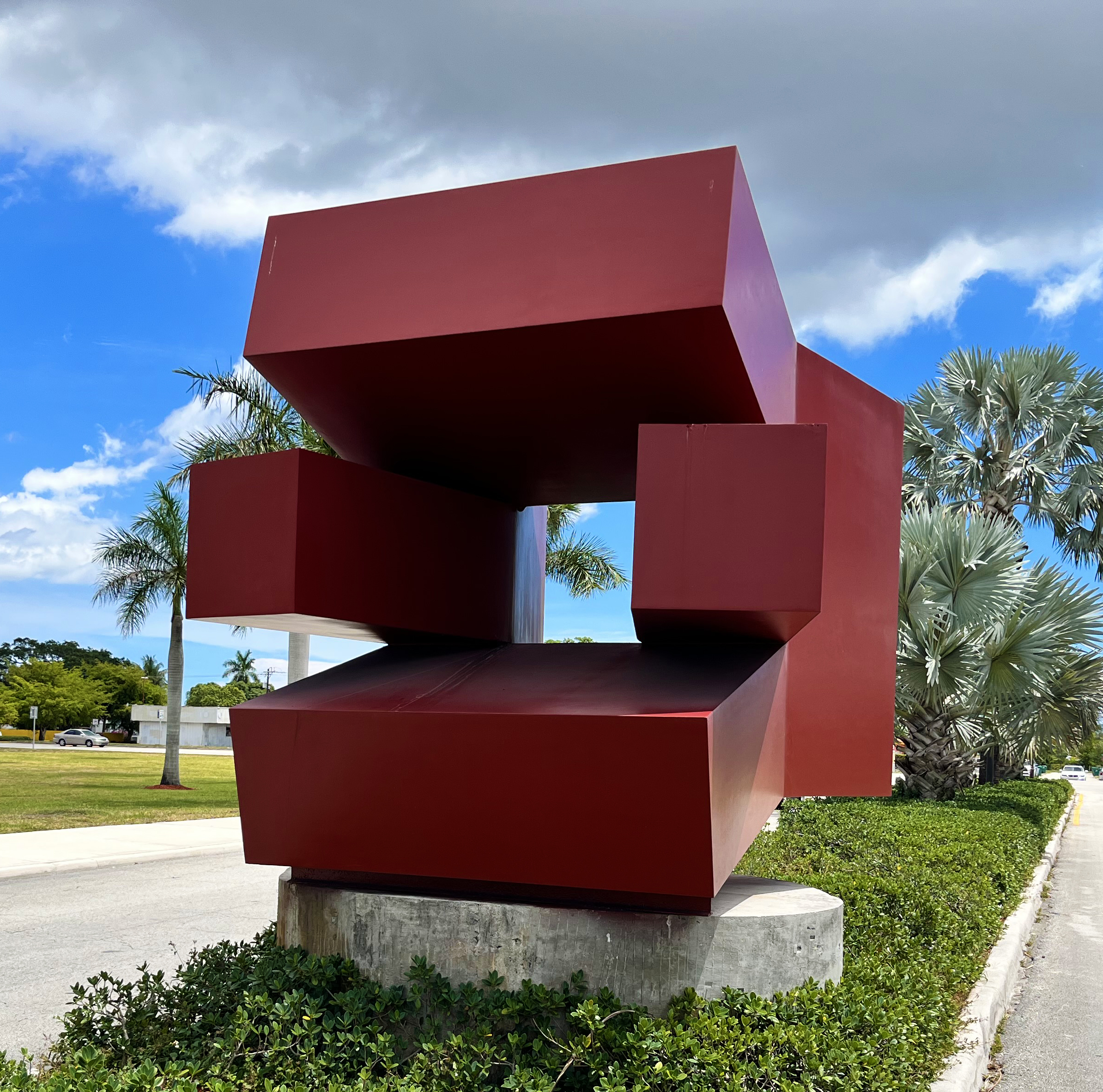 Exhibited at the Civic Center, Washington, D.C., 1985. Dynamite is one of three sculptures in the park exploring the possibilities of transforming a cube into an object of art. A hole was carved through an imaginary cube. Then, a few cuts were applied on the two open ends, and the parts were bent out to convey the illusion of an exploding cube. The result is a dynamic object instead of the original static form. 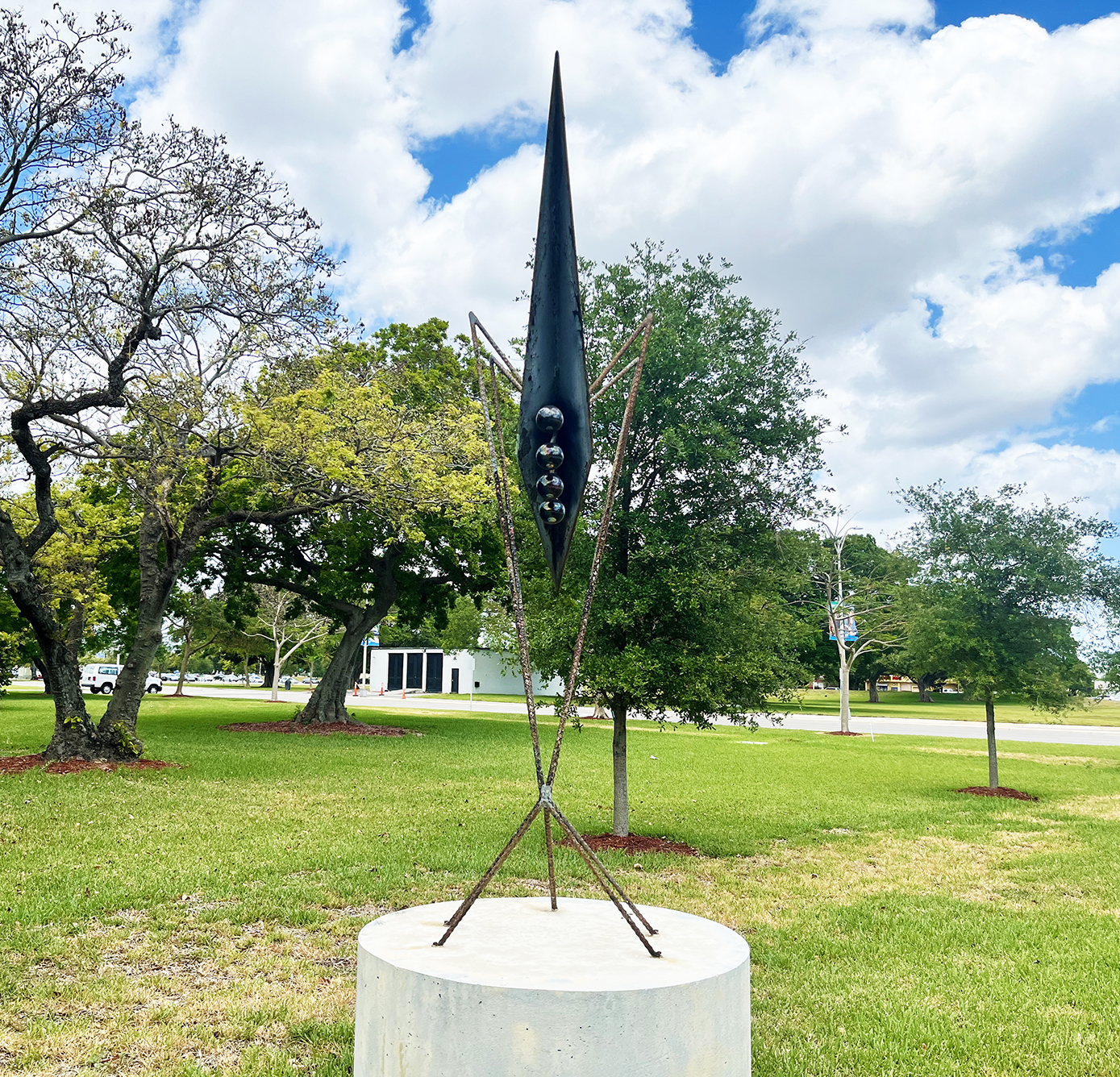 This piece was inspired by the inner beauty of the flowers. 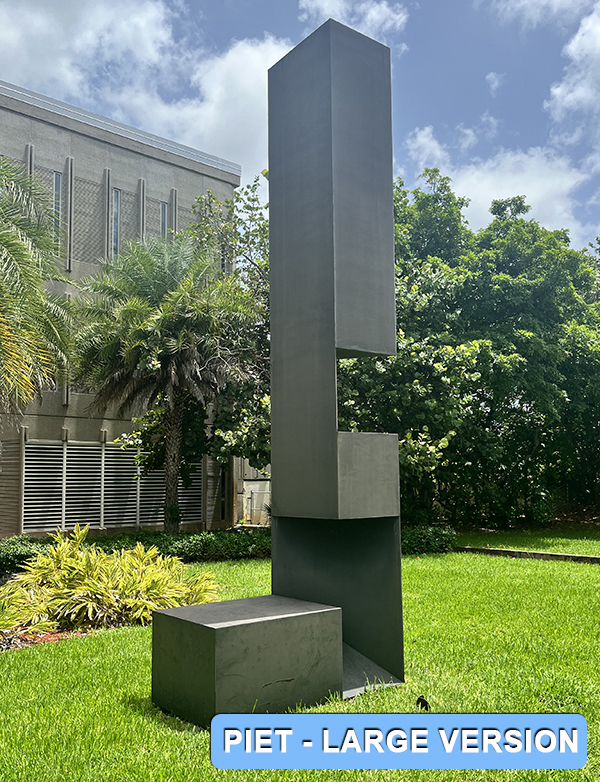 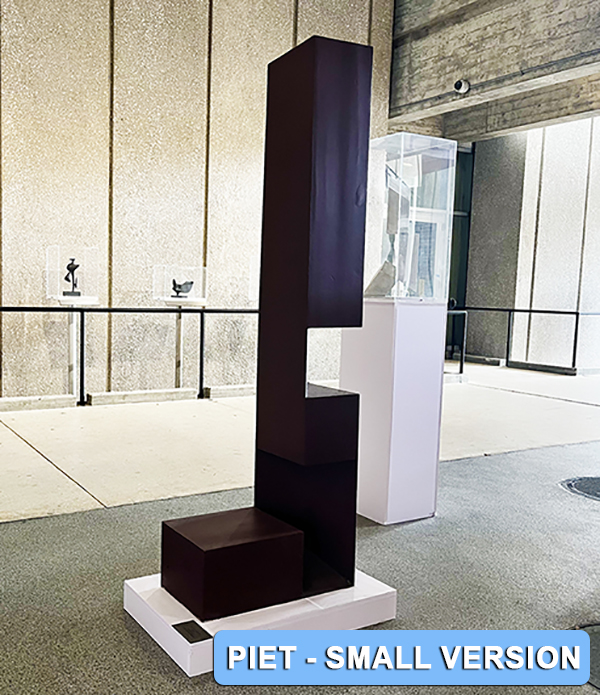 One-man show, Museum of the Americas, Washington, D.C. “Piet” is the artist’s homage to Piet Mondrian, an  abstract artist. Simple lines and solid color fields illustrate how much can be said with few elements. The artist used his own geometric principles to express his admiration for Mondrian’s work. 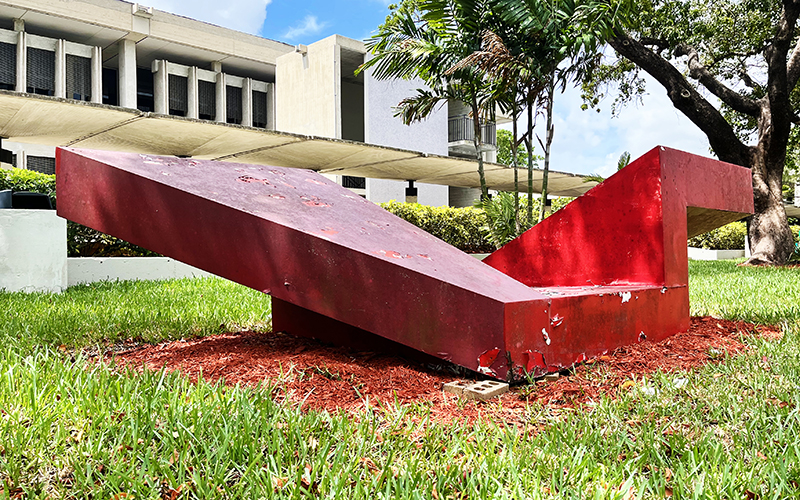 "Toboggan" is a geometrical configuration of the principles of "contrapposto," used originally by Renaissance artists to create the effect of dynamism when representing the human figure. This sculpture is a massive geometric form that expresses this concept in a simplified abstract way. 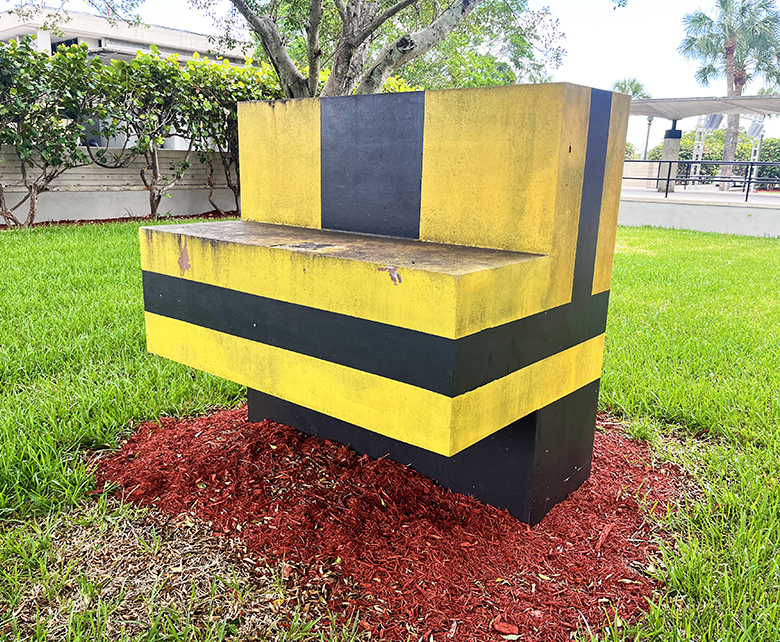 This sculpture is remarkably simple, but its use of color, applied in a variety of configurations, offers the viewer a different perception of its forms. 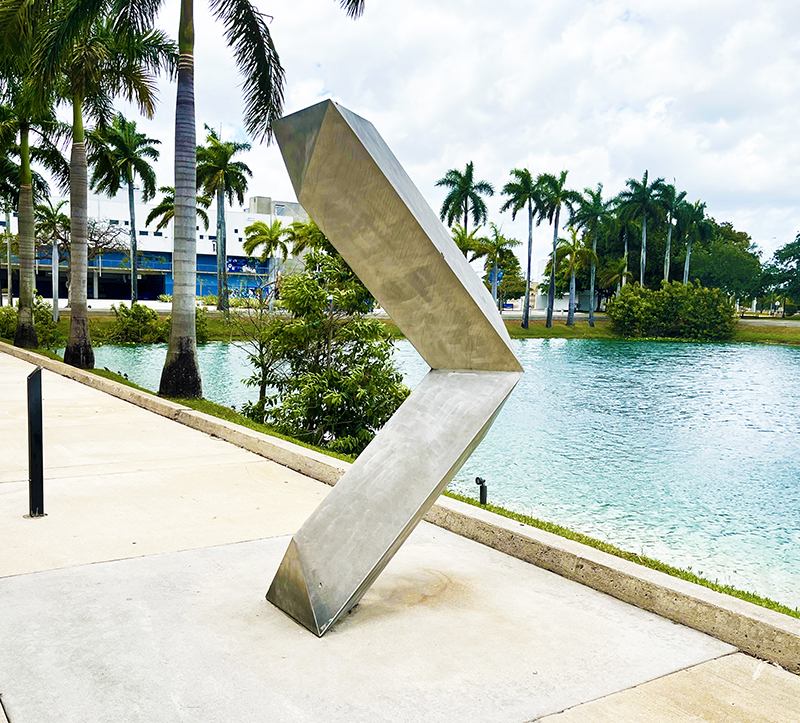 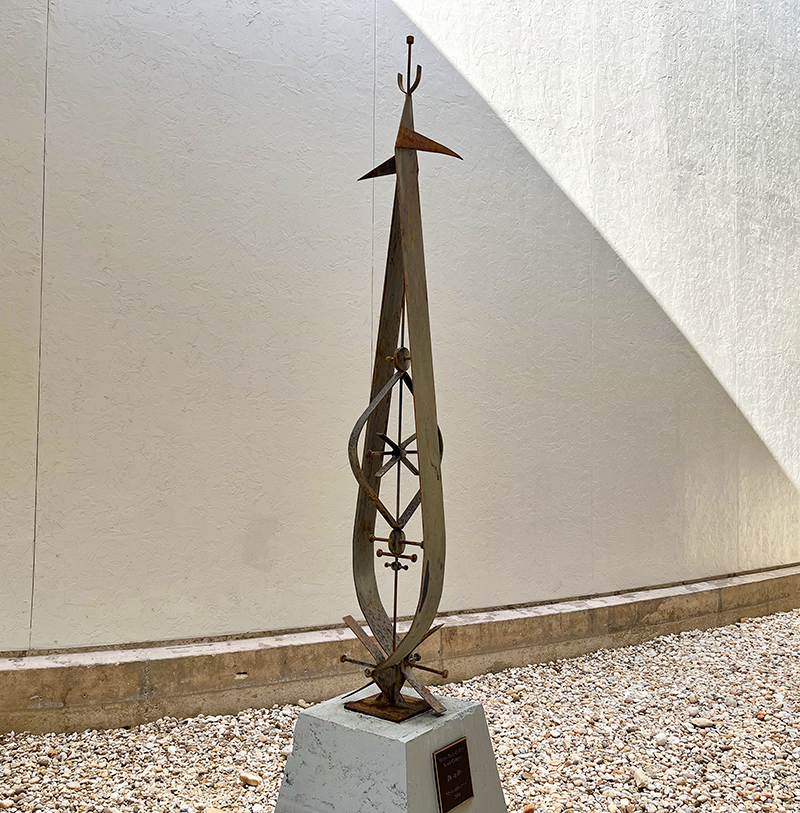 This object is a free form rendition of the solar system. This work and others like it are often created as large-scale cutouts. 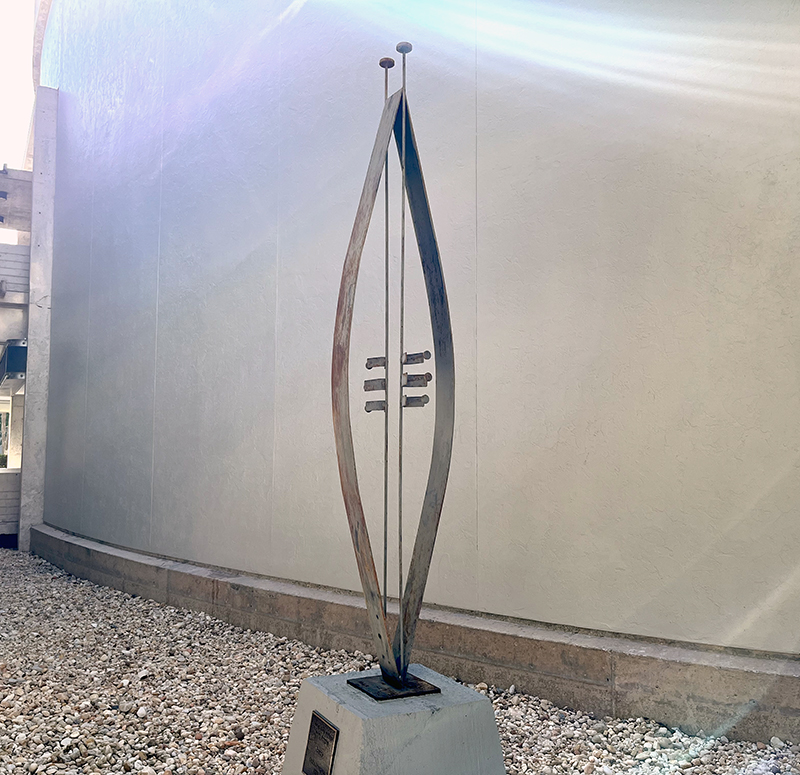 A representation of bows used throughout history, Arcos is a graceful, yet simple metaphoric expression inspired by Afro-Cuban culture and symbols. 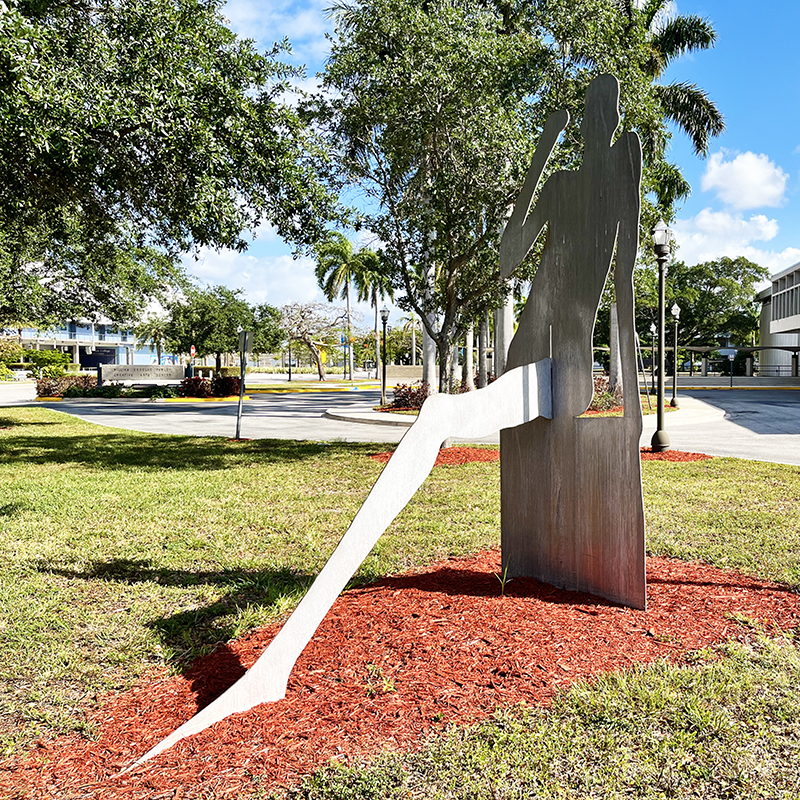 King is known for his simplified figurative cutouts in metal that are presented with a warm, subtle touch of humor. 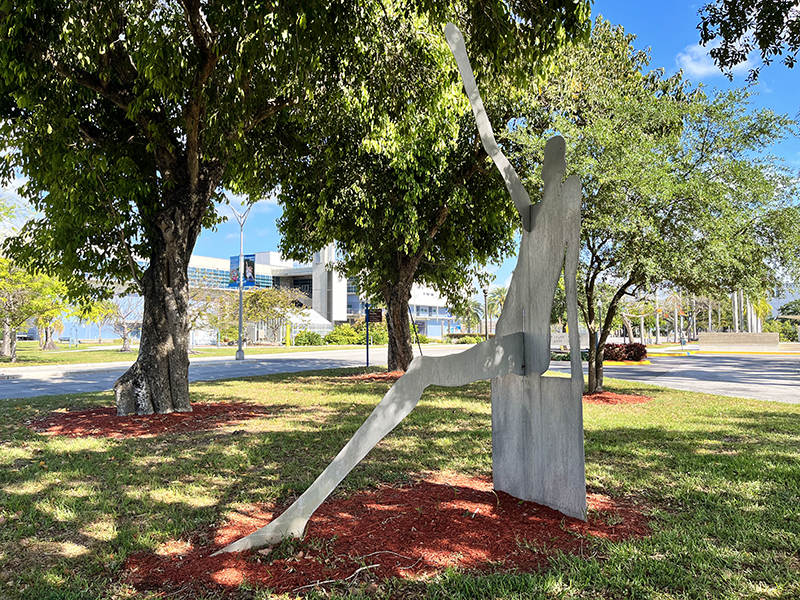 “The slat-like legs on which many of the artist’s figures stand seem emblematic of a precarious existence , and a balance that is always hard-won.” 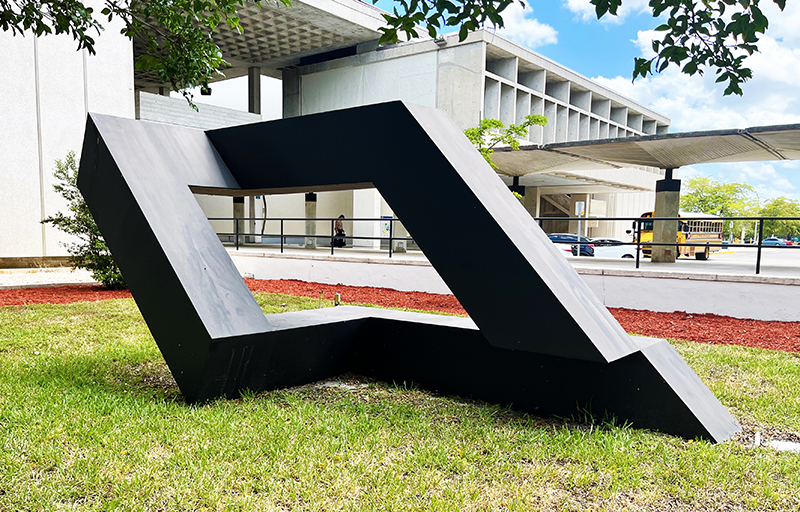 This sculpture was exhibited at the Civic Center in Washington, D.C. in 1985. This sculpture depicts a massive geometrical form moving through space and ending with two extremities barely touching each other. Light and shadow change how the angular shape appears throughout the day. 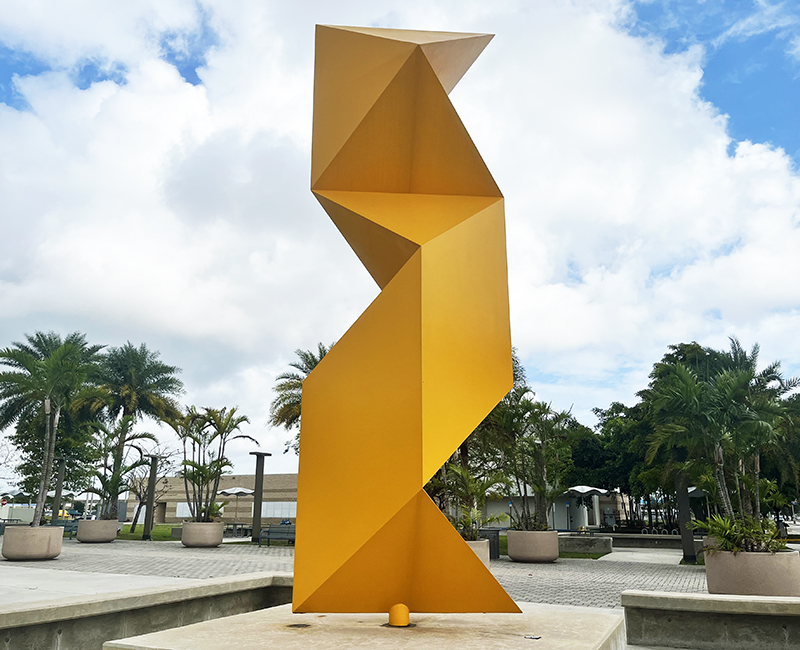 This vertical composition rests on an angle at the base and ends on an angle at the top. The sculpture is made of a spiraling sequence of rhomboids and triangles connected to each other in an ascending movement. Four rhomboids and fifteen triangles compose the figure. The angularity of this columnar design allows a continuous play of light and shadows giving the sculpture an infinite variety of visual changes. 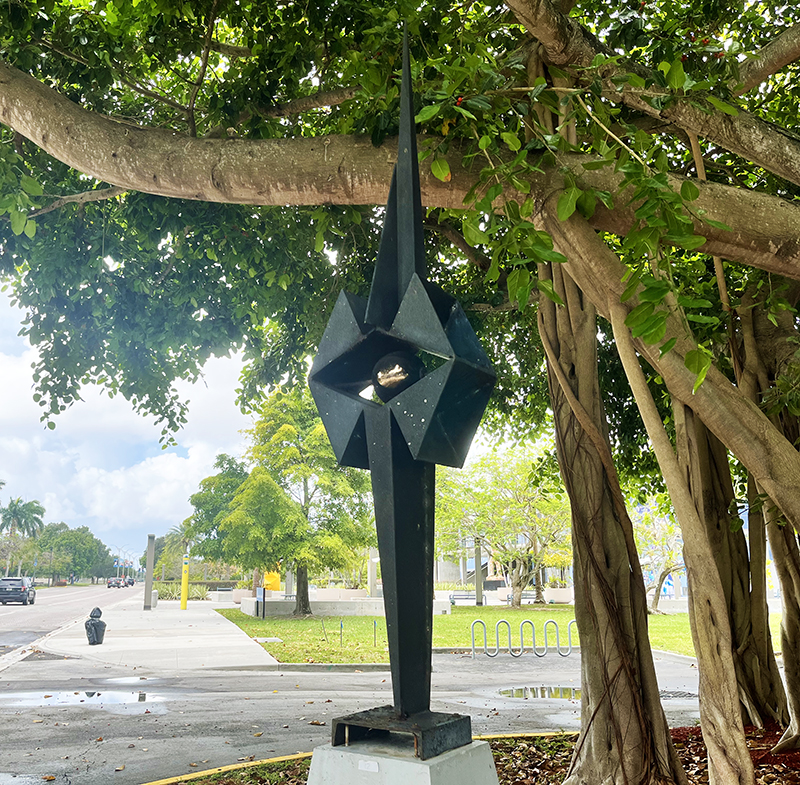 The translation of the name of this piece is the light that guides the way. 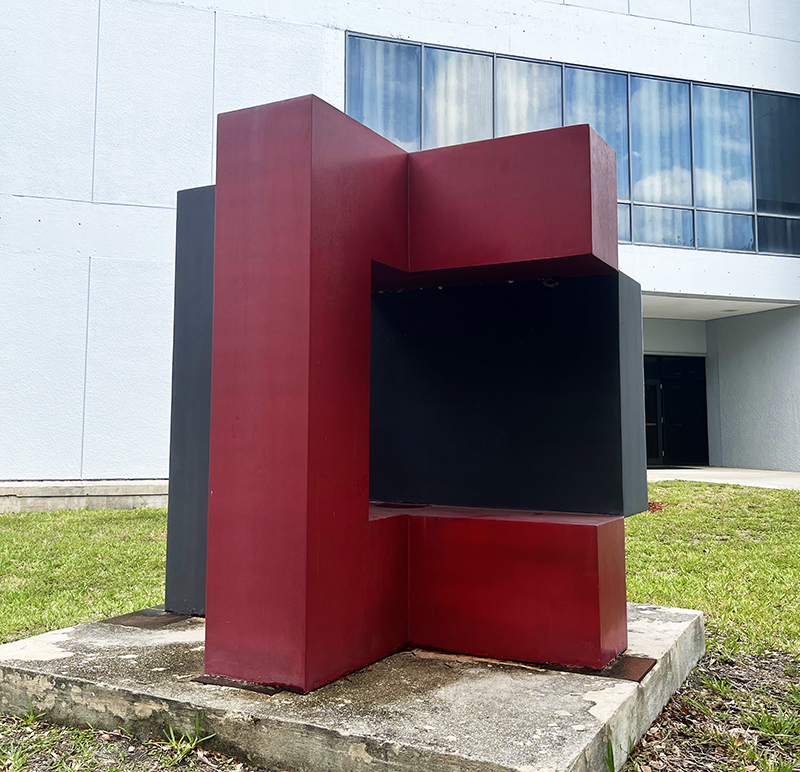 "Habitat" is a potentially habitable shape if enlarged to a massive scale. The middle cantilever is a structural challenge for engineers to ponder. 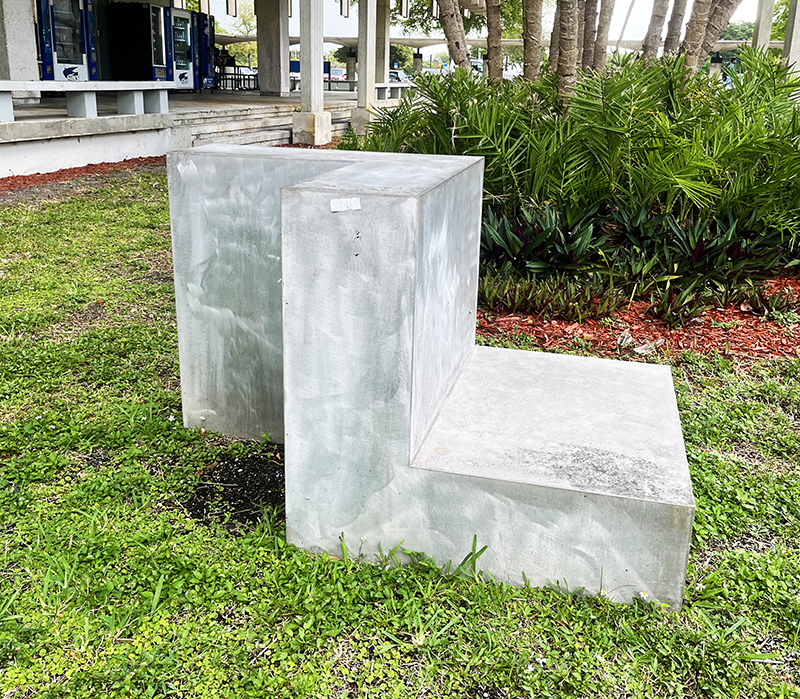 In 1969, this sculpture was conceptualized by the artist for a mixed-use apartment or shopping complex. The artist felt that buildings did not have to look like a box or column to be habitable. Instead, a building could be a sculpture or a work of art and not a utilitarian container. Today, some well-known architects implement this approach. 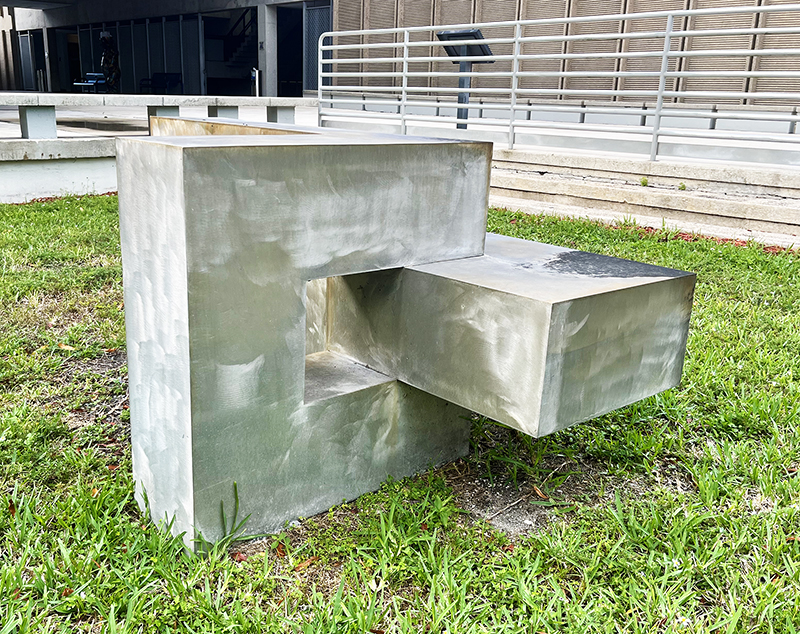 This object was conceived as a sculpture building. 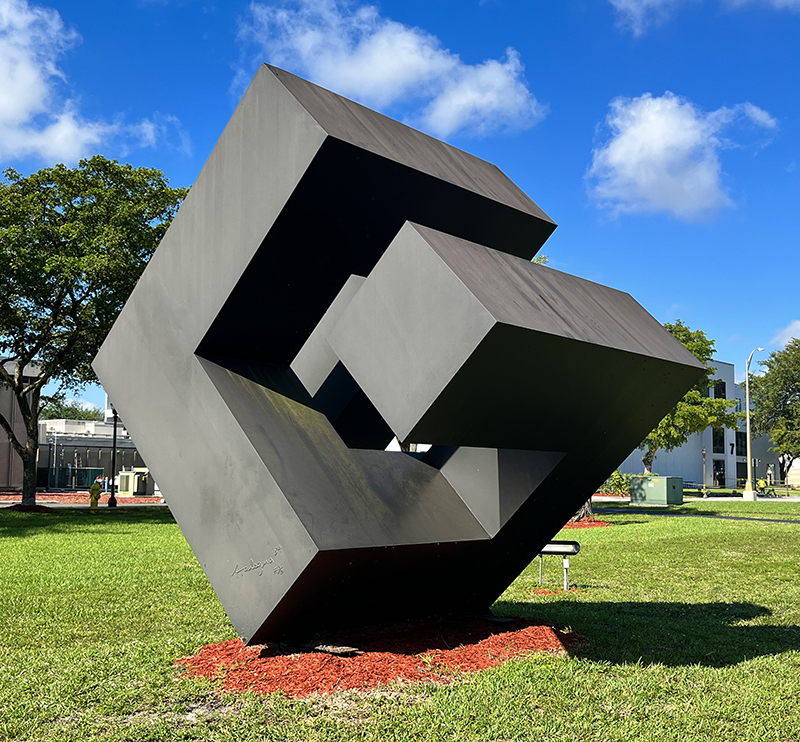 Denver Art Museum, Denver, CO, 1981. Volusia County Court House, Daytona Beach, FL, 1982. Although the title of this sculpture sounds like a legalistic term, it is instead a reference to the limits one imposes upon oneself when working with a shape — in this case, the cube. The goal was to extract parts of the cube and yet maintain its basic shape. To add dynamism, the sculpture was placed on one of its angles, which changed the horizontal and vertical lines into oblique ones. This structure's interior structure and underground support maintains the piece's balance. 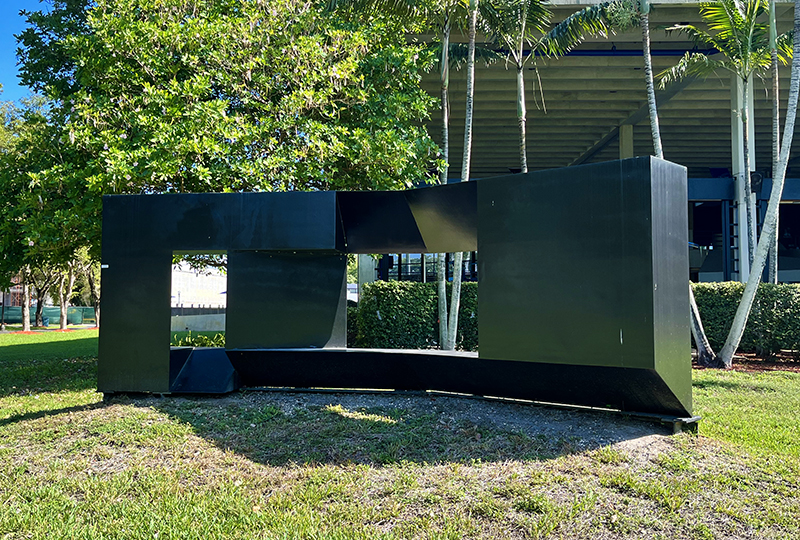 An earlier version in plexiglass was exhibited at the Baltimore Museum of Art, One-man show, 1974-1986. This sculpture was on loan to the City of Washington D.C. (located at the intersection of Massachusetts Avenue and 21st Street, NW). A wall-line sculpture that bends at an angle, it has a window and a door, suggesting to the viewer that there may be something to see on the other side. This is an architectural statement that has a life of its own. 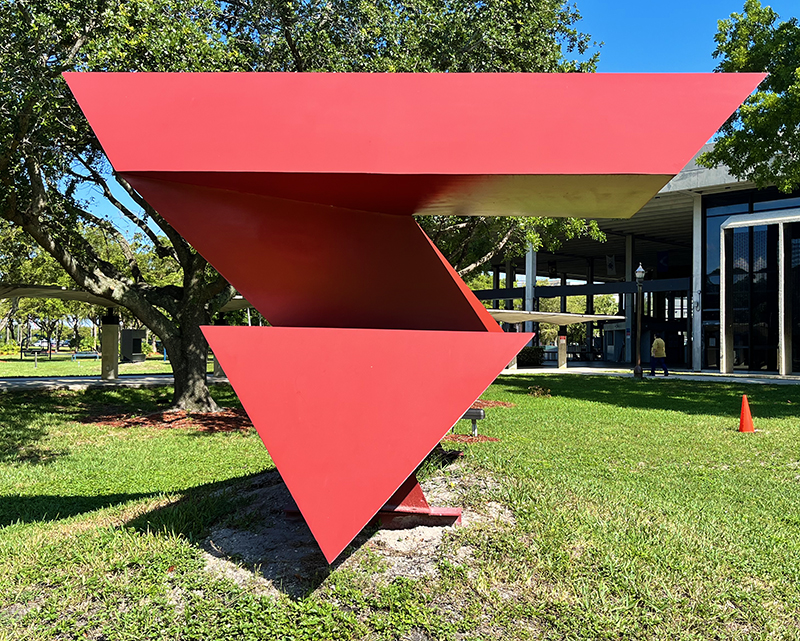 Part of a tetrahedron has been removed. The resulting shape stands precariously on an angle pointing in several directions at the same time and is positioned as a flying object. This heavy "bird" will never fly except perhaps in a viewer's imagination. 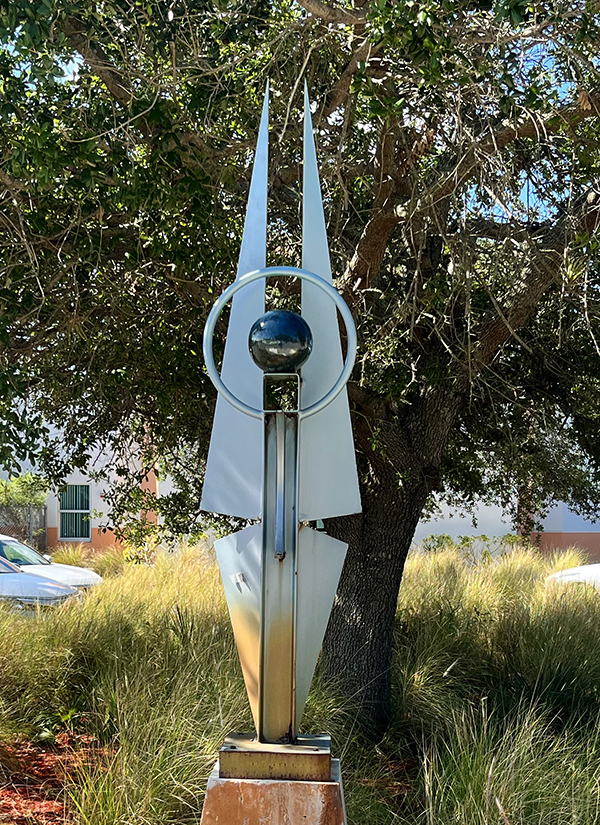 Abstraction of an angel; the memory of a battle for freedom. 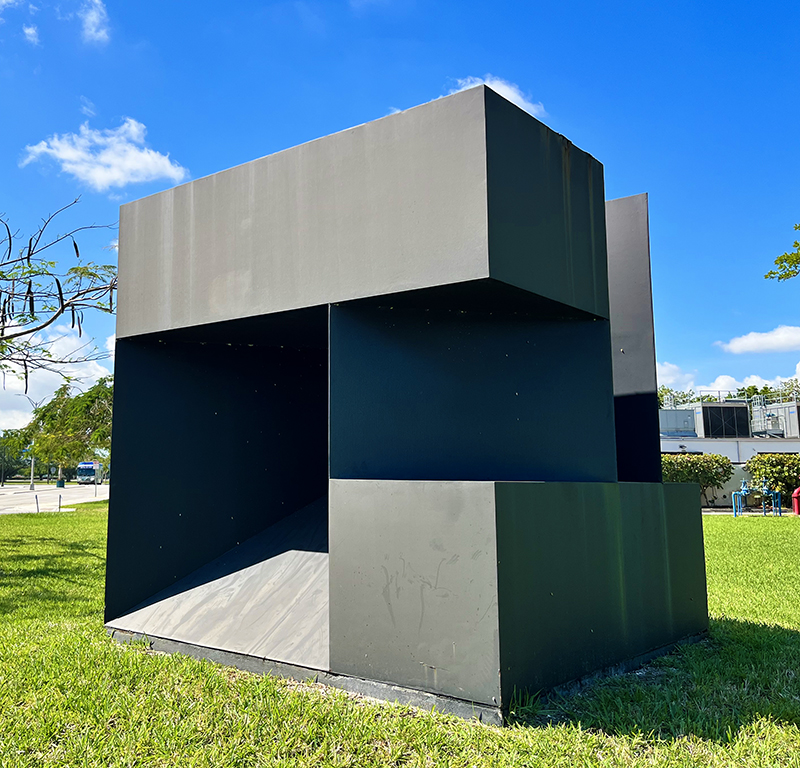 This sculpture represents the transformation of a cube. The interior of the cube was carved creating a space yet maintaining its original form. Each side is different, and the spaces created show a variety of intriguing viewpoints revealing what would be called “the inner cube.” Its title is an anagram of bucolic.